As with every console, much of the buzz about Wii revolves around its specs. The Wii boasts 512 MB of internal flash memory, two USB 2.0 ports, and a slot for SD memory expansion. The system’s technological heart — a processing chip developed with IBM and code-named “Broadway” and a graphics chipset from ATI code-named “Hollywood” deliver stunning performance. And instead of a tray, Wii uses a single, self-loading media bay that plays both 12-centimeter optical discs used for the new system, as well as Nintendo GameCube discs. 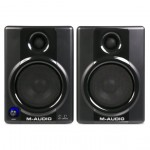